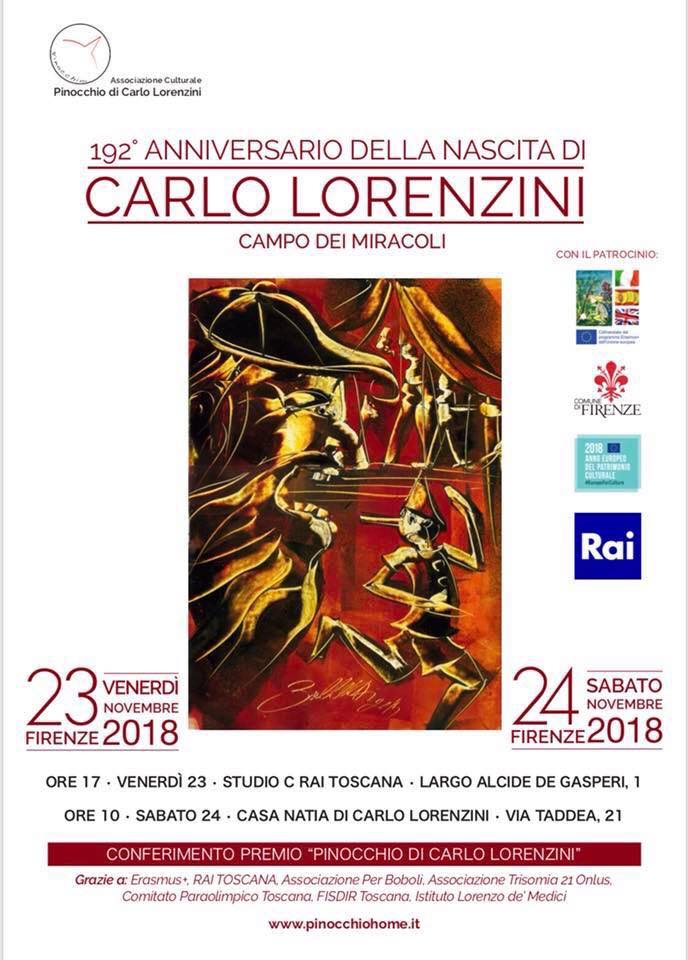 On November 23rd 2018 there was a new multiplier event of the Erasmus + Project Campo dei Miracoli , organized by Associazione Culturale Pinocchio di Carlo Lorenzini , which has allowed to present itself to the public has so far been achieved and to reward, with an international recognition, relevant personalities distinguished in particular areas of culture, art, sport, commerce, fashion and more.

“This year too the Award is the excellence of the world of Italian and international excellence – states Monica Baldi, President of the Associazione Culturale Pinocchio di Carlo Lorenzini – The list of winners is the result of competent Italian-American jury who has carefully evaluated the nominations, the historic study of the Rai headquarters in Tuscany I think it is particularly exciting to be able to introduce each award winner with a few minutes of images from the famous television series “Pinocchio di Comencini”, thanks to the generous contribution by Rai Teche.In addition, the participation of a large delegation of former MEPs testifies to the importance of our European project “Campo dei Miracoli” and give importance tospecial moment, thanks also to the setting up of a small exhibition of exclusive Pinocchio collections “.

– Prize “Mastro Geppetto” (crafts / business / trade) to David Overi , President of Formitalia Luxury Group spa, the Tuscan company that has committed to the great success of the project Pinocchioworld in the Italian Pavilion of the Shanghai World Expo 2010

– Prize “Grillo Parlante” (science / culture / criticism) a Teresita Mazzei , first female doctor elected in 2017 President of the Order of Doctors and Dentists of Florence, dedicated to his life in cancer research and cancer care

– “Mangiafoco” Award (cinema / show / theater / TV) to Andrea Balestri , the famous Pinocchio in the flesh in the famous script by Luigi Comencini

– “Gatto e Volpe” Award (environment / dialectic) to Paola Locchi , the “Lady of the Crystals” that in 50 years has made to respect one of the flowers all ‘eyelet from Florence

– “Tree of the Zecchini” Award (economy / finance) to Nicolas De Santis , creator of Brand Eu and Capitan Euro aimed at developing the European identity and citizenship

– “Balocchi” Prize (play / fun / creativity) to Andrea Ceccomori , international flautist of great versatility, has participated with professionalism and creativity to the promotion of European cultural projects referring to music and to Pinocchio

– Prize “Colombo” (patronage / associationism) to Father Bernardo , abbot of the Basilica of San Miniato al Monte, true reference point of spirituality and culture that goes well with beyond the ecclesial boundaries. On the occasion of the Millennium celebrations, he opened the doors of the abbey to the city.
</ P>